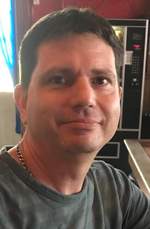 Charles (Chad) Felderhoff, of Waco, passed away on Tuesday, August 27, 2019 at Providence Hospital while in the presence of his father and brother following a brief, but courageous battle with cancer. Services, including a rosary at 2 p.m. and mass at 3 p.m. will be held Saturday, August 31, 2019 at OakCrest Funeral Home Waco, Texas with Fr. Anthony Odiong officiating. Burial will be schedule at a later date in Houston, Texas.

Chad was born September 25, 1970 in Houston, TX to Charles Francis Felderhoff and Mary C. Dittlinger Felderhoff. He graduated from Marcus High School, Lewisville, TX and completed his college degree at the University of Houston.

Chad loved debating and earned national recognition for debating while in High School. Throughout his life he enjoyed debating with others regardless of the position they took. Some said Chad would even debate a rock and as his brother-in-law stated “I will miss our deep conversations on everything controversial in the world”. Chad had a talent remodeling houses and early on in his career invested in and worked on houses in the Houston area and later worked with his brother remodeling houses in the Waco area.

Chad also worked with various companies including managing sport bars in Austin and New Orleans. In recent years Chad worked as an Independent Insurance Adjuster primarily in the central Texas area but also at locations throughout the United States as a result of houses damaged by major storms.

Chad was great with children and especially loved his two nephews who live in Australia. He looked forward to them visiting TEXAS and always gave appropriate educational and scientific games, etc.to them and they loved playing with Chad. He had a great love of reading and a talent for helping friends learn how to write term papers for “A” results.

Survivors include his father, Charles Francis Felderhoff and wife, Veronica, of West, brother, Lawrence A. Felderhoff of Waco, and sister, Cecelia T. Felderhoff Todd and husband Brett, and nephews, Jake and Charlie Todd, of Melbourne, Australia, uncles and aunts and numerous cousins and their families.

The family extends a special thanks to all our family and friends who have supported us at this trying time. The love and prayers you have shown him and us is a precious gift for which we are eternally grateful.

In lieu of flowers, donations may be made to your church or the charity of your choice.

You may share a memory or send a message to the family at OakCrest Funeral Home at www.oakcrestwaco.com.