To share your memory on the wall of Esther Jefferson, sign in using one of the following options:

Esther Marie (Glasker) Jefferson, 87, found rest in our Lord on October 7, 2019. Services will be 10 AM Saturday, October 12th at OakCrest Funeral Home.

Esther Marie (Glasker) Jefferson, 87, found rest in our Lord on October 7, 2019. Services will be 10 AM Saturday, October 12th at OakCrest Funeral Home.

Marie, endearingly known as “Mama J” and “Ganny”, was born June 13, 1932 in Mart, TX to R.S. Glasker and Mary Lee. She moved to Petersburg, TX in the 1950’s to raise her family. She returned to Waco in 1988 where she lived out the remainder of her years surrounded by family and friends
.
Marie was hardworking, a woman of great faith, devoted to loving others and praising God. She loved her children, grandchildren, siblings and many friends. She was a friend to everyone she met and within minutes was endeared as “Mama J” to friends, acquaintances and neighbors. She brought joy to all who knew her and could brighten up a room with her laugh. Marie was a “praying Mama” and not one to mince her words, she spoke truth from a place of love and great faith, a trait she has instilled in her children and grandchildren.

Marie left her fingerprint on this world and the heart of everyone who had the pleasure of knowing her. Mama/Ganny will be dearly missed. Rest in Heaven!
Read Less

To send flowers to the family or plant a tree in memory of Esther Marie Jefferson (Glasker), please visit our Heartfelt Sympathies Store.

Receive notifications about information and event scheduling for Esther

We encourage you to share your most beloved memories of Esther here, so that the family and other loved ones can always see it. You can upload cherished photographs, or share your favorite stories, and can even comment on those shared by others.

Posted Oct 09, 2019 at 09:01pm
Granny I will surely miss as I always have. I will never forget you and our "little trips" and adventures in Waco - Rest in Peace my friend. Peggy

Posted Oct 09, 2019 at 04:34pm
Our heartfelt condolences! May you find comfort and peace in your time of loss. Ganny will be forever missed. Love, The Holder's - Todd, Steph & HJ

The FTD Vibrant Sympathy Planter was purchased and planted a memorial tree for the family of Esther Jefferson. Send Flowers

Flowers were purchased and a memorial tree planted for the family of Esther Jefferson. Send Flowers 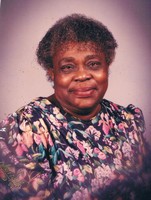