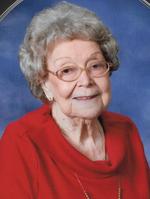 Frances M. Davis went to be with her Lord on Friday, April 5, 2019 at the age of 91. Funeral services will be Wednesday, April 10 at 1 pm at OakCrest Funeral Home, 4520 Bosque Blvd., Waco. Burial will follow at Waco Memorial Park. Visitation will be Tuesday, April 9 from 6 to 8 pm at the funeral home.

Mrs. Davis was born in Rosebud, Texas on August 26, 1927. She was proud to have been raised by her 7 older sisters. At the young age of 8, she was preceded in death by her mother, Della M. Her father, Sam, preceded her later.

Frances began her career in bookkeeping working for Cameron M. Talbert, CPA and then later for KWTX, from where she retired after 32 years of service. She enjoyed her years of retirement by cruising all over the world.