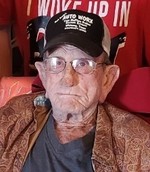 Ralph Henry Murphy passed away peacefully on April 9, 2019. A Celebration of Life will be held Sunday, April 14 at 2 pm at OakCrest Funeral Home, 4520 Bosque Blvd. in Waco.

Ralph was born January 29, 1936 in Brandon, Texas to Miles and Alta Murphy. He lived the majority of his life in Aquilla, Texas.

He served in the National Guard and the US Army with an honorable discharge from 1957 to 1961.

Ralph was adored by everyone who ever met him. He was most known for being the bus driver, custodian and groundskeeper for Aquilla ISD. He would always have a tall tale to tell and lend a hand when needed.

He is survived by one remaining sibling; Frankie Rose of Whitney; daughter Tensy and husband John Ward of Aquilla; granddaughter Crystal and husband Josh McCook of Pflugerville; grandson Jeffrey Ward of Aquilla; his 3 most special "honey bunnies", his great grandchildren, Hayden, Emma and Lainey McCook of Pflugerville and several nieces and nephews.

In honor of Ralph, aka, PawPaw, the family would like to thank all the family and friends that loved him. He will never be forgotten, he was one of a kind and will be in our hearts forever.

A special thank you goes to Providence Hospice Place. They made his last days here with us so comfortable.

Memorials may be made to Providence Hospice Place.