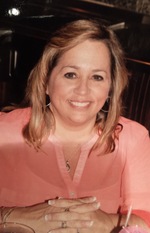 Sebrina Aneece Terpening was called home to our Lord on Wednesday April 17, 2019. She was in her home surrounded by her family who held her hands as she made the final journey. A memorial service will be held Wednesday April 24 at 2:00pm at OakCrest Funeral Home.

Sebrina was born March 8, 1968 in Waco, Tx. to Bob and Belta Fitzpatrick. She graduated from Rocky Mountain High School in Ft. Collins, CO in 1987. After graduation she moved back to Waco where she chose to stay forever. Sebrina worked briefly for HEB before having her beautiful children Holly and Jonathan. She then worked for the daycare so she could be closer to her kids. When her kids started school she went back to HEB and started her 20 year career.

In September 2014 she met John, the love of her life. They were married July 4, 2015. Sebrina and John lived in Eddy until 2017 when they moved to her family home place in Lorena. The family land became her sanctuary where she and John would sit on the back porch and play with their two dogs Ranger and Jake, and walk out to the pasture to feed carrots to their pet donkeys. She always said she was happiest at home.

Sebrina had a very deep love for God, and her unwavering faith had a huge influence on everyone she knew. Her beautiful smile will be dearly missed, but her family knows she is up in Heaven and completely healthy again.

Sebrina had a deep appreciation for Christian music, and the positive and encouraging message it provides. In lieu of flowers, her family would like donations made to KLove Radio.